(I hope you all enjoy this guest post from June of the awesome new blog Braless in Brasil as much as I did! Be sure to check out her blog as well.)

I want to first thank Brittany for letting me write a guest post here.  Her blog was the first one that I found that really discussed body image, bras, and finding clothes when you're curvy and it was like a breath of fresh air to me. :)

I could write a book on body image issues.  Growing up with large breast while never having any great examples on how to find a well-fitting bra and dress my figure, really did a number on me.  However, I think the worst experience that I have had to date came from shopping in Brazil.

Before I get to that, let me give you a quick background.  My husband, daughter, and I moved to Brazil earlier this year.  Also, for over a year now I have been in the process of losing a significant amount of weight (as of right now I'm over 60lbs down). I've lost 20lbs of that weight since moving to Brazil.  Because of that I desperately needed some new clothes and bras, enter the horrible shopping trip.

We're lucky enough to have a mall close by with a ton of lingerie shops in it.  I thought for sure I'd be able to find something there (or at least be pointed in the right direction of a specialty shop).  NOPE.  I entered the first store, Marisa Lingerie (basically, the Victoria's Secret of Brazil), and after briefly talking to a sales clerk it became immediately obvious that bra shopping in Brazil would prove to be impossible.  It turns out that bra sizing here is done by assuming everyone is a B cup and they simply increase the band size.  So according to my bust measurements I should be a "50", however, the corresponding band size with that bra fits a 36.5-38 inch underbust, which would dwarf my 31" underbust.

However, I was determined to find something that would fit so I went home and scoured the internet for anything.  It turns out that two brands: Hope and Liz have recently introduced cup sizes but the largest I've been able to find was an "F" cup.  Still, I wanted to try it on for myself so I found a Lingerie shop close to the mall that carried both brands.  When I went there not a single salesclerk could answer any questions about the bras.  They also didn't even have a changing room so you could try on the bras. I ended up putting it over my shirt just to see, yeah, even with another bra  on already I could see that I would be sporting a pretty great quadraboob look if I were to purchase that one.  I think at that point the message really hit home that I was monstrously huge and wouldn't be able to find a good supportive bra at all.  I remember the sales lady even giving me a strange look and kept asking if I was sure if the bra didn't fit.

I still had some hope, though.  Hope at least that if I couldn't find a bra, maybe I could at least find some shirts that fit!  I was feeling pretty good about my loss and I knew that I was definitely out of plus-sizes in terms of pants  so I thought I'd be able to pick up some shirts at the very least.  Oh, how wrong I was!  After visiting many, many stores at the mall it become obvious that in Brazil the bust is cut even smaller than in the US.  Most non-plus-sized stores carry up to a 44 or 46 (roughly US sizes 10 or 12/14) so I grabbed clothes in size 42-46 and ran to the dressing stores.  Nothing fit.  In any of the stores.  Occasionally, I could find a size 46 that would at least let me button it up all the way (or zip it up all the way or pull it down over my bust) but the waist would be huge in comparison.  I could get into either a 42 or 44 pants just fine but tops were a complete no go. I have to admit that I teared up a bit in one of the dressing rooms after what felt like the millionth top didn't fit.

Between the bra problems and the shopping trip, I got the idea that I was freakishly huge compared to the average Brazilian woman, even after losing all that weight!  Boy did my ego take a hit.  I had gone in full of confidence and left with the thought that even if I get to my goal weight, I'm never going to be able to just buy clothes here. Never.  A lot of my insecurities from high school where I was never able to find clothes that fit right and I couldn't wear the same trends as my friends resurfaced.  I just felt like I was built like a freak.  It's amazing after all these years how quickly these thoughts can resurface even when you're old enough to know better!

It really did get me down for awhile.  It didn't help that I was still wearing my old too big clothes that covered up all my hard work from weight loss.  Eventually, though, I decided enough was enough and I needed to do something about it.  First I started really looking at other women on the street, I saw how their bras and clothes fit and it became pretty obvious that I WAS NOT ALONE! Even women who looked incredibly put together were sporting the 4-boob look and had bands inching up to their necks.  Other women were busting out of their tops that were clearly meant for someone with a B cup, not a G cup.  Even websites that supposedly sold bras in larger sizes showed pictures of models with very, very badly fitting bras.  Even though I really felt sorry for these women who must be dealing with a lot of back pain, it came as a huge relief to me that I wasn't a freak here but I had the same problem that so many other ladies had.


Cosmetic Surgery Abroad. Cosmetic surgery's popularity is spreading throughout the developed world. South Korea has the highest ratio of cosmetic surgeons to citizens worldwide, but Brazil has the most cosmetic surgical procedures per capita. ... In Brazil, breast reduction is more popular.[7]

From http://www.medscape.com/viewarticle/542448_2 (see Grobman P. Vital statistics. New York, NY: Plume Books; 2005.). It seems crazy that it's easier for women to pay for surgery than it is to find well-fitting clothes and bras!

Finally, I came to the conclusion that I CAN do something about this.  I don't have to sit around in old bras that don't fit well and clothes that look horrible on me.  I started researching and looking at sales.  My husband is traveling to the states next month and I've already ordered a number of bras and shirts ahead of time so that I can hopefully find something that fits me.  I've also ordered some bras from Ewa Michalak.  I'll have to pay some pretty costly customs fees for them but it will be well worth it to find my size.  Due to the costs of well fitting bras/clothes, I'll probably have to make do with a lot less but it's worth it having things that fit well.

I also started reading blogs from other busty girls.  The first one I came across was Thin and Curvy and it really was an amazing experience to read about someone who had really BTDT when it comes to ill-fitting bras, hard to find clothes, and body image issues.  It was such a relief to know that these issues were real and not something to just be dismissed because I was "too fussy".  Another thing that I've started doing is getting some of my old outfits tailored.   Thankfully, alterations are relatively inexpensive here so it's something I plan to do often!

I do have at least some good news to report.  I have found a few clothes since that horrible shopping down.  I made a great score at a local consignment shop.  This dress: 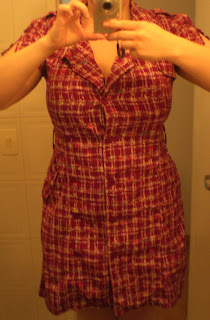 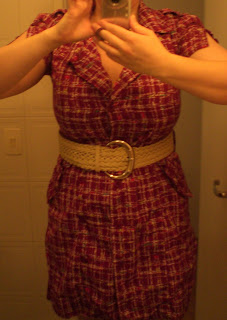 It does still have some gaping but is infinitely better than most.  I plan on taking it in and have the waist taken in and see if she can let out the bust a bit (or at least sew an extra button there).  Sorry for the wrinkles, I haven't had a chance to iron it yet. I also found this dress at C&A, which really was an incredible find! 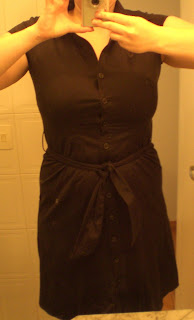 The material is very stretchy, which is why it probably works.  Again, the bust still has a slight gap but I think I'm going to take it in soon to get an extra button put there as well as have the waist taken it on this one also.  I have to admit this find really did give me a huge confidence boost.  It's amazing how something so little can drastically change your mood!
Posted by Brittany at 7:40 AM